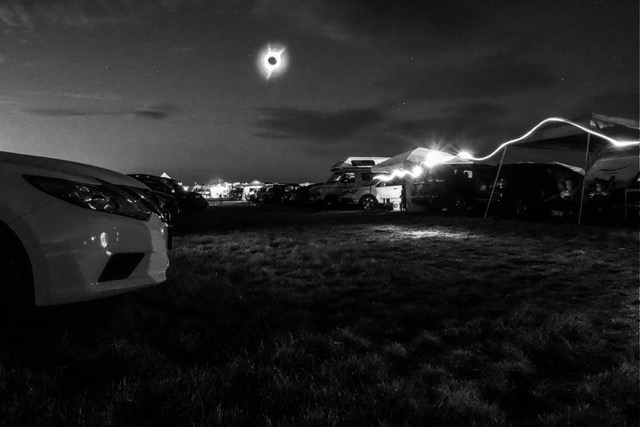 Eclipse shows a seemingly plausible scene that was photo-captured the night before The Great American Eclipse of 2017. The actual eclipse, yet to come, would not occur until after sunrise.
Statement:
A time traveller, holding aloft a light orb, dances through an encampment of stargazers outside the town of Madras, Oregon on Eclipse Eve. The traveler, (who is invisible except for his orb), pauses for a few seconds and casts an oversized projection of next morning’s total eclipse up and onto the northern sky. Then, he travels a few more steps before leaping back to the future. The whole event is over in less than half-a minute.
Next morning, the eclipse was seen in the eastern sky. The traveller’s demonstration of coronal shape was borne out. But the Sun and Moon were now smaller in apparent size. The entire eclipse event unfolded as Moon Shadow raced eastward across the continent from the Paciﬁc Coast to the Eastern Seaboard.

Totality popped in Madras at 10:19 AM local time as the sightline from Madras to the Sun fell entirely inside the Moon’s umbral shadow. Totality ended 2 minutes and 40 seconds later, as Moon Shadow galloped out of Madras to the east.

Alas, was the previous night’s premonition only a dream to be preserved on a piece of glossy paper?
Eclipse is a superposition of fact and ﬁction. Truth is that pictures lie all the time, including this time.

The eclipsed Sun, in the northern sky, is a total ﬁction.

A stranger, holding a light aloft, actually moved into the scene during the time of Eclipse’s timed exposure. But, the stranger, moving too fast and too dimly lit to register, was invisible to the camera’s detector, much like Dark Matter. Only the motion of the orb was recorded.

So much for time travel. …It’s not real. …at least not yet.

Otherwise Eclipse is “real,” except it gives the appearance of more light being there than actually was there. And Eclipse itself, the paper thingy framed and hanging on the wall in front of you, really is real.

One last thing: If you think too much about the nature of time you’re sure to get confused and also you might get a headache.

A second last thing: What about Moon Shadow––racing with the eclipse on its back from West to East, faster than a jet plane, rather than the other way around?

Doesn’t the Sun rise in the East and set in the West? …Yes, according to our senses.

Doesn’t the Earth revolve on its axis once in a day? …Yes, so it’s OK to deny our senses.

Doesn’t the Moon orbit the Earth in an almost circular path once in a lunar month? …No, not really.

Moon Shadow knows both Moon and Earth orbit the Sun. He is not confused.

Truth is a matter of perspective. And perspective always casts a shadow on our understanding.