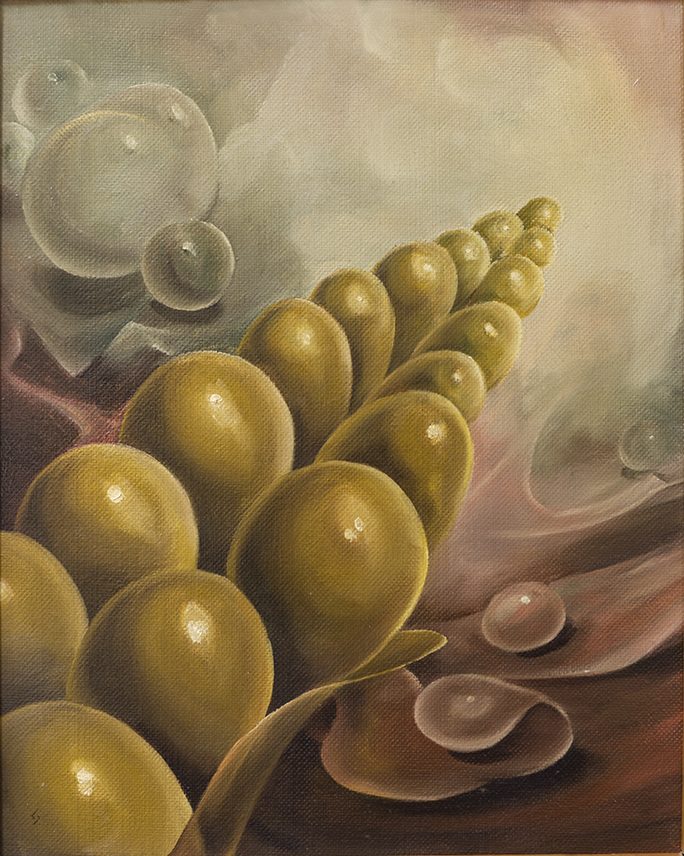 “Spoken language is insufficient to negotiate existence and its meaning, therefore, other forms of expression are needed. In my artwork, I aim to be thought provoking, to arouse inner awareness.

I have always been interested in exploring the scientific miracles of the natural universe, especially within the fragile biosphere that envelops Earth. The paintings of the last decade draw inspiration from nature—including biological, geological, and astronomical phenomena—and anthropological and prehistoric artifacts. My work does not represent any reality as we see it, but attempts to demonstrate the experience of the forces essential to the continuity of life on Earth.

Ultimately, my mind, my eyes, and my hands are merely instruments in producing this work. Despite knowing better, I do frequently experience the sensation that the work is not created by me, but through me. My art has a chance for limited survival, but I know my body does not.”

Ten’s first encounter with notoriety came on the day of his birth. His mother would often tell how he had entered this world in the wee hours of Pentecost Sunday morning. A severe thunderstorm was raging, and it would ravage the countryside of rural Marienberg, in the province Overijssel in the Netherlands, before the night was through. Within a mile of the ten Broeke family home, two heifers were struck by lightning and killed. Ten was born a blue baby gasping for air. A thin membranous veil—locally believed to signify the gift of second sight—covered his face. The gift conferred in lieu of the supernatural, however, was manifest from early childhood, in the form of his uncommon artistic skill and a profound understanding of and reverence for the wonders of the natural world.

Ten arrived in the United States as a young man. While working as a drug designer alongside some of the greatest minds in organic chemistry, Ten never neglected his career in art. He was an active member of the vibrant, revolutionary art scene that electrified Greenwich Village in the late ‘50s and ‘60s, where he earned the admiration and friendship of many of the scene’s most influential members. Although that dynamic era in art has sadly receded, Ten has had many domestic and international shows, honors, and awards, and he has consistently garnered enthusiastic praise for the entirely unique biomorphic, geomorphic, and metamorphic imaginings that he renders with perfect technique, brushwork, and style.

Throughout his career, Jan ten Broeke has been known and recognized by his simple nom de brosse, “Ten”. Ten titles his work with his name and date of each work’s completion as opposed to traditional, descriptive labels, because he believes it confuses the viewer’s perception of his paintings rather than clarifies it.

Ten lived with his wife, Barbara, in the historic village of East Millstone, NJ, in a Dutch colonel farmhouse that was built in 1763. He was highly active in local environmental and historical preservation organizations. They have two grown daughters and three grandchildren. Jan “Ten” ten Broeke transitioned from this world to the next in 2019.