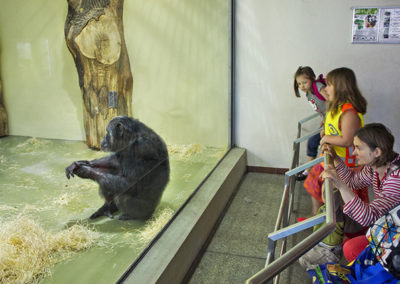 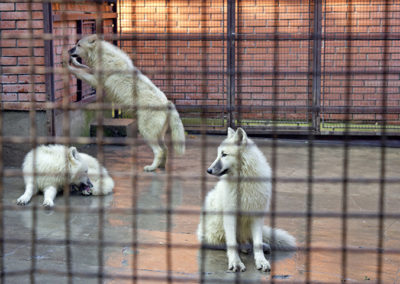 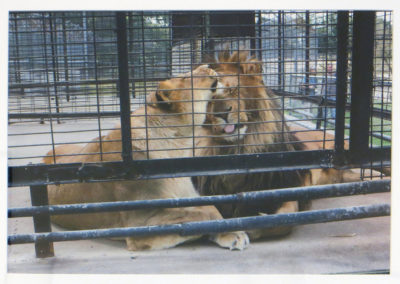 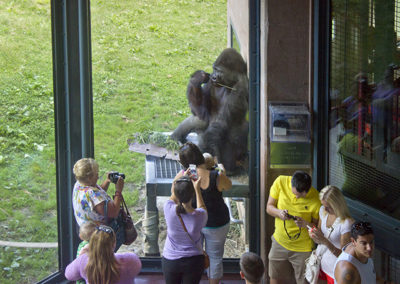 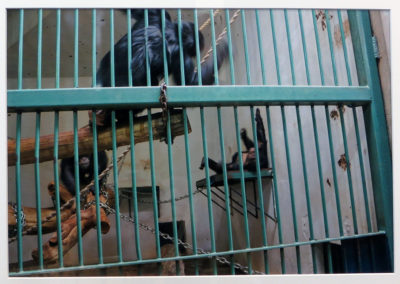 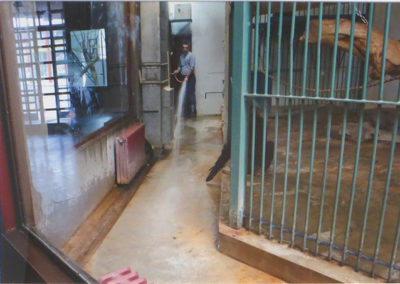 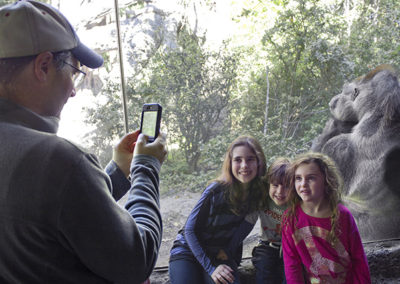 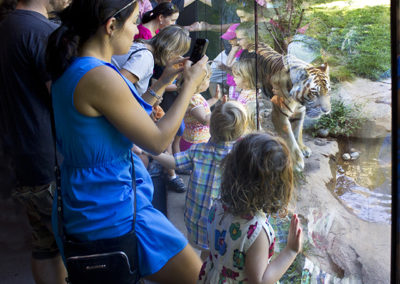 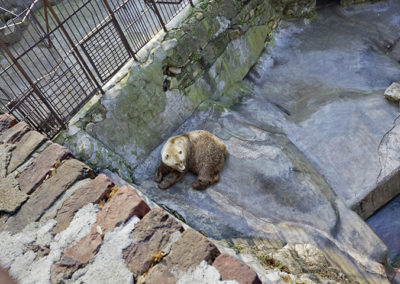 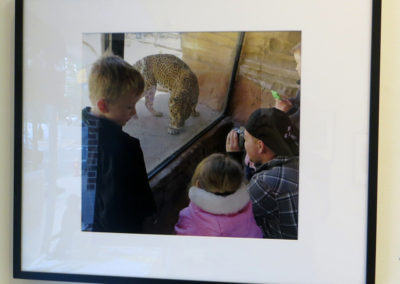 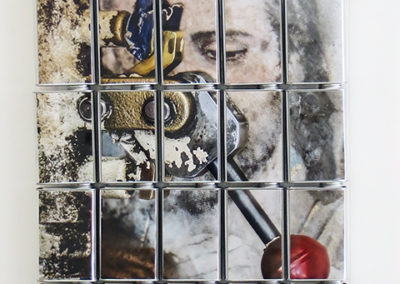 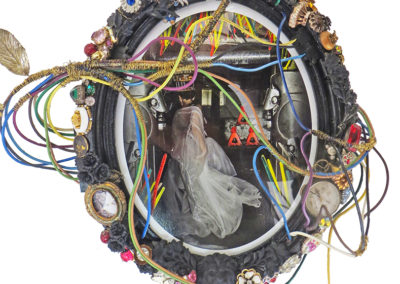 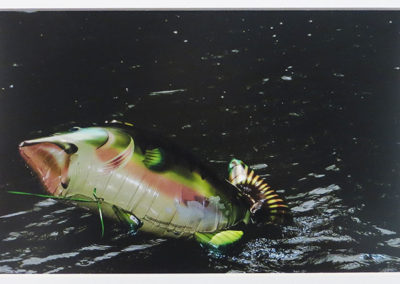 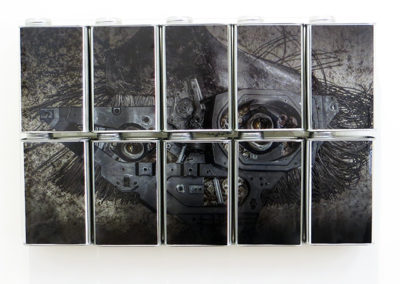 As Long As There are Humans – Photographs by Melissa Tomich

Even as a child I remember being uncomfortable at the zoo. There was something about the foul smell, the stark cement-floor cage, but it was even more about the look of the animals that I recognized as vacant, sad and in distress. I couldn’t put it into words at first, but I knew the feelings. Watching the animals chewing on the bars, banging their heads against the wall, pacing back and forth or in circles, I now ask why would anyone want to go to a zoo to see that?  I never consciously related to these creatures, but their prison-like environment and the whole idea of their incarceration for our entertainment offended me.

In more recent years, the animals have been allowed a little more space, along with the ability to be inside or out, and are given plastic toys. Some walls are painted or papered with murals of mountains and forests, and the rocks and trees in their cages are made of cement and plastic. Calling these animal collections a Wild Animal Park, or Safari Habitat, may seem like progress, but is it?

Although I am still in awe of their beauty and exoticism, and it’s still interesting and thrilling to be able to stand that close to animals I would probably never see “in real life,” there’s still that same gnawing and prickly feeling of guilt, shame, and embarrassment when I witness imprisoned wildlife. The assault of negative feelings never weakened.

These photographs weren’t made to make you smile or to amuse. It’s difficult to explain why I was compelled to photograph animals in zoos.  As Lewis Hine said, “If I could say it in words, I wouldn’t need to photograph.”

Melissa Tomich has been a fine arts photographer for more than 35 years. She studied photography as an undergrad at Kean University, and later at the International Center of Photography in New York City.  Her recent exhibitions include two group shows (2012, 2013), one solo show (2015) at the HPGRP Gallery in New York City, a juried photography exhibition at the Monmouth Museum (2012) and the HereNow Rutgers 250 Group Exhibition at the Zimmerle Art Museum at Rutgers (2016).

WIZARD and WORK – Photographs and Mixed Media by Christine Anderson

Wizard and Work showcases work from the photo series Inflatables, Fenced Dragon and Wizard, which were created from 2014-2015. The series Wizard has recently made into a book currently available for sale.

Inflatables
Creative expression is something is not just for making of artwork. It is something you should aspire to do in everything you do.
Inflatable is a on going photo series based on a previous series Supermar which is about plastics and the amount of man made materials that are a part of our everyday environment. Inflatable is a more creative take of this theme making pictures utilizing natural and man made materials. Making unreal pictures which mirror the real world we live in now.

I am not afraid of death, but the process of dying itself.

My brother had asked me if I wanted to go see foreclosed property where two deer died in an attempt to jump a fence.  I was interested in how the deer that could easily jump a six-foot fence could get impaled on a five-foot fence, so I asked my brother to drive me to the site.

I found that the carcasses of the deer were rotting on the fence like my brother had told me.  The two deer were in various states of decay on different parts of the property.  It was the first week of spring after a brutally cold and snowy winter. When the earth was buried in snow the deer tried to jump the fence and sank into the snow as they made their leap.  They had no hard ground to make the jump off of and ended up getting caught on the fence that was spiked at the top.  They died a slow painful death.

No one heard their cries; no one saw their struggle as they died. Predators had left their marks, including me. Am I a predator taking pictures making my marks or am I telling their story? I did not hear their cries or see their struggle.  I only saw the evidence of their slow struggle to die. And now I will also observe their decay.

I can tell their story, but will someone hear or see me?

Am I the deer? Taking my pictures that may or may not be seen.  Like the deer no one sees my struggles.  Or am I a predator taking the last thing the deer have left to give – their story.

Wizard (artist statement)
After 14 years and 78,000 miles my car—a green Volkswagen Beetle—is still cute despite worn seats and pitted exterior. I don’t blame her for breaking down once in a while. Really, I don’t. You see, I’m a sentimental person. We have bonded and mostly I like to think of her as vintage rather than old. It makes me feel better about our relationship. Over the years, many mechanics have serviced the car. Kal, our current mechanic, has a way of giving me bad news without making me feel bad. His manner and his expertise inspired me to create the pictures featured in Wizard. Kal is a lot like the Wizard from the Wizard of Oz story and I am perhaps a bit like Dorothy in the story. I bring my broken down car for repair and he fixes the car and sends us on our way. Dorothy, of course, sends herself home with the Ruby Slippers and eventually I will find my way to a new car. But for now I am thankful the Wizard is here keeping my car and me together. Kal allowed me to photograph his shop during working hours, giving me access to premises, people, and auto parts. This book is a portrait of Kal’s car repair shop loosely based on the “Wizard of Oz” story enhanced with my own creative inspirations.