Sue Eldridge Ward “There were famines and earthquakes” laser jet print transfer, nail polish on board, $800.00 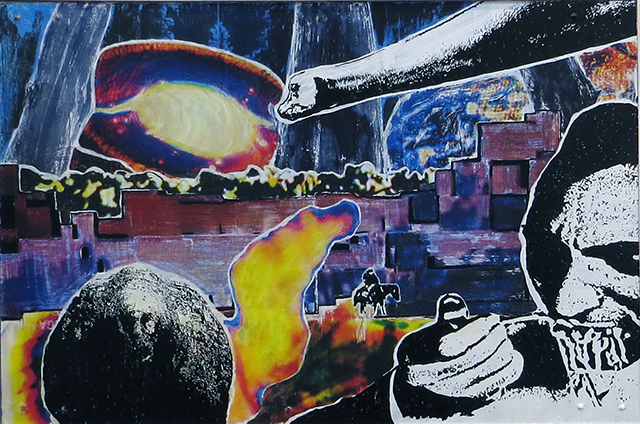 My most recent body of work, titled “Love and Violence in an ArtalWorld”, spawned from an episode of “American Idol” that was transmitting incorrectly, creating geometric, pixelated images across the television scree images were quite beautiful in a very formal way and they looked like buildings to meese buildings created the central  arrangement to the collage’s composition. I was reading old Horizon magazines at the time, from the 60s and came across an article about 19th century environmentalists who predicted the demise of the Earth at the hands of modern man. I took the words from that article and searched for TV shows and movies that included those words  produced some interesting subjects, ranging from predictable Nature shows to a 1936 movie with Bette Davis and  Humphrey Bogart (“e Petrd Forest”), to give an examplee photographs taken from these shows and movies are then manipulated digitallyes are in black and white, projected and painted with nail polise backgrounds or landscapes are taken from the photographs, some traditional images of trees and planets and some less obvious  images – a close up of a gem or animal skin or a red comfortere Elephant in the room for the work I am submitting is Greed and over consumptioe to the right is singlemindedly gorging on spaghetti – while the rest of the world is rather falling apart. Dinosaurs have reappeared,  there is a monster coming towards the viewerere are strange things happening in the skyere ieere is alse lazily and nonchalantly riding a horse, oblivious to the destruction and mayhem aroune geometric shape of the buildings creates a sense of man-made order among the natural disordere shapes above the building are actually a photograph of a crowd taken frolm still of a Hit-ler rally – subtly emphasizing greed and the denial of its existence.