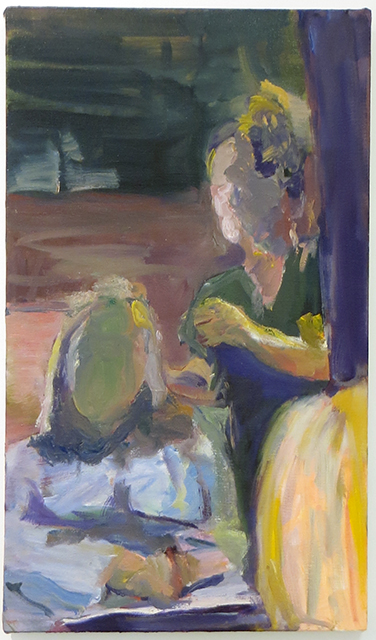 I photographed my friend at her hair salon. I was most interested in the dynamic between the hair stylist and my friend, the patron. While this subject matter is straightforward, I can appreciate that hair styling is a deeper matter, not because of the individual  characteristics of peoples’ hair, but because people can use it to reinvent themselves.  While I reflect on my painting, I note the warm hue of the salon and the shadow concealing my friends face. I chose a palette that I had been introduced to at the New York Studio School, (titanium white, cadmium yellow light, cadmium red light, alizarin crimson, viridian, and ultramarine blue), and then added indigo and chromium  oxide green. In my opinion, indigo is a nice accent to the ultramarine blue because it is almost black but contains blue. And, the introduc-tion of an “olive green”, (chromium oxide green), was intended to capture orange walls that were dimly lit.  I found portraiture inherent  in the process  of creating this work. While having attempted it years before, I still findit daunting. I got into the modeling of the face briefl, then quickly “got out”.  A preponderance of shadow seemed to mandate this. The blonde hair is, I think, the brightest part of the painting.