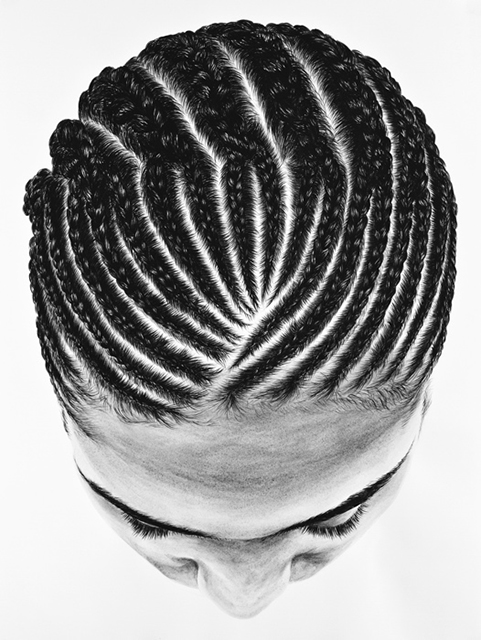 The Dreamtime is inspired by the Aboriginal stories and visions of creation.  Each braided pattern, carried by the stu-dents, is a map of the ancient universe, a topographical palimpsest of the world in pattern: valleys, mountains, forests, oceans, rivers, streams.  The painter and the hair-braider lay down their marks like their predecessor creator beings, carving and inscribing, creating and being, in turn, created by their labor.  These braid patterns are the language for the new aboriginal, the transplanted and de-territorialized nomad.  The braid patterns both record journeys to the present and re-present cartographical longings; they are a stamp of entry into a brave new world order while simultaneously remembering prehistory.

In the age of GPS cell phones tracking movement and satellite surveillance with biometric scanning recognition, the modern day aboriginal wears his location like an image-text on his head.  While previously, the imperative of the lo-go-centric perspective of the Renaissance artist afforded the viewer and the image-maker the semblance of control and superiority over nature, the aerial perspective–this view from above–reminds us that we are neither all seeing, nor all knowing, that we desire the release of our fascist egos.

The Dreamtime is present time for the hair braiders and the aboriginal students.  They are the weavers of patterns, who recover the mythical past of the natural world and its creation through the transmission of age old signs and images.  Via these image-making practices, we are retracing the energy of the Dreamtime beings in order to be able “to tap into the power of the land and these Ancestral Beings” (McKnight, 32)