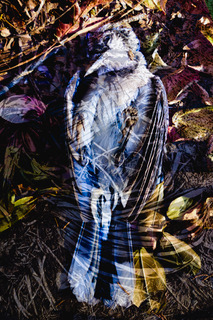 A killing frost comes in the night and is finished by morning. The killing of birds comes all of the time and is not seen.

Since 1970 we have lost one-third of the bird population here in the United States, a net loss of three billion birds. We didn’t even notice. These were not endangered species but common birds: larks, blackbirds, sparrows, warblers, finches, swallows, thrushes and jays.These are the birds whose birdsong we have grown accustom to hear, on spring mornings, an hour before dawn.

Why didn’t we see it?Why don’t we hear the loss of birdsong?

How big is such a loss? Imagine a flock of 300 birds. If you live on a bird migration route you’ve seen flocks of this size and bigger wheelinoverhead. Such a flock might find a resting place in a single lge tree. If they were starlings they would cry out like a machine gun in a deafen-ing staccato roar.

So what would be the size of an imaginary forest that could rest three billion birds? Three thousand birds would require ten trees, each holding three hundred birds. Three billion birds would need a forest of ten million such trees. To equal the population decline of American birds in the last fifty years, the forest would need to lose sixty million birds per year; five milliobirds per month for every month of every year of my adult life. That is 167,000 birds everyday, or nearly 7000 birds per hour. The loss comes down to one bird every half-second — for fifty years. For comparison, the Perseid meteor shower peaks-out at about one “shooting star” per minute on a single night in late July or early August. In reality, bird density is much lower than our hypothetical 300 birds per tree. Some birds flock in migration but, otherwise, most birds livetheir lives much farther apart. Birds often live in pairs to raise their young. Birth and death are non-linear and punctuated. Birth comes in the spring and summer. Death comes at times of stress: because of loss of habitat, because of sickness, at times of excess heat or cold or during storms, by feral cats, or just the stress of being too young or growing too old.

Line up the dead birds end-to-end. Give each dead bird a six-inch space along the line.That line would stretch from here to the moon.

Extinction need not require a meteor impact. It can be diffuse. It can take one hundred years — two hundred years. And so, at first we dont notice the massive die-off.

Will the stresses of climate change speed-up the killing of birds? How many birds will remain in another fifty years?