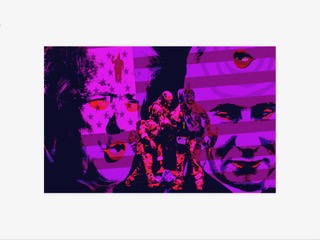 The past five years have vividly and sadly demonstrated the inherent instability of our American Democracy. The question is open on whether or not this democracy will avoid collapse. I think survival hinges on the coming together of concerned citizens, some radical rethinking and then good luck in making fundamental political changes to stabilize our government. We are being assaulted by rapid technological advances, high and rapidly growing global population, high demand for refugee immigration, near instantaneous wide spread of news, rapid transmission of disease, pressures of climate change and so forth. All of this is happening while global interdependency is at an all time high and individual self sufficiency has all but disappeared.

And, there are those that see our dire situation as an opportunity to gain power and enrich their financial empires.

My contribution to this exhibition, a dynamically illuminated collage entitled “Putin’s Clown”, recognizes the surprising success that two contemporary politicians, Trump and Putin, have had at grabbing political power through the destruction of institutional capabilities and by setting subcultural groups against one another.

These two devotees of violence have skillfully used lies, overt and closeted racism, and hate speech to gain power and control money. They have unrelentingly stoked insecurities and fears, fracturing our population into self centered interest groups with strongly opposed views and forcing our political parties into an uncompromising highly polar state . At the same time they have inserted puppet leaders into their nation’s governmental institutions to weaken the institutional competencies to the point of widespread failure.

In the United States, our twice impeached past president, has just completed an incompetent four-year romp through his presidency. In his wake he left widespread destruction, suffering and COVID death. Mocking our foundational beliefs, his final act before reluctantly leaving office, was his incitement of a violent mob attack on our Capitol building and on legislators themselves in a failed attempt to block his successor. Nevertheless, he remains in control of the Republican Party and serves as titular head of white-power insurrection-bent militias operating in the United States. While Trump has tried to control the police and military to cement his gains, Putin operates in the style of a mafia don. While Trump is a wannabe autocrat, Putin is one.

Against this background, “Putin’s Clown” springs from digitized images that I captured from a computer monitor or a television screen. The images are coded binary patterns stored in computer memory or in the memory of cloud servers. They are devoid of size, shape or color. They are ones and zeros. I used computer programs to combine and manipulate these digital images to suit my artistic vision and to explore how images can create virtual realities that inform our understanding of the world we live in.