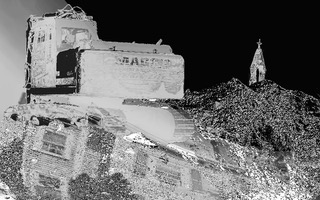 The evolution of downtown Bound Brook has long been tied to its namesake stream and to the Raritan River, which meanders nearby. About every 20 years or so, when the river crested above 28 feet, nor’easters or hurricanes could be counted on to bring waves of flood damage with subsequent repair and rebuilding to the downtown area.
The the river crested in 1999 at over 42 feet due to Hurricane Floyd.  Even so, the downtown neighborhood retained much of its 19th century historic flavor. At the cost of a more-and-more “rundown” condition, the state of disrepair meant that the downtown region of Bound Brook was aﬀordable to poor, working class people, who could make a home and raise a family here.
The installation of a flood control system now protects Bound Brook from the Raritan, but not from a flood of developers. The town is being transformed because of the railroad, which passes behind Main Street stores and businesses, and which provides access for commuters to Newark Penn Station and onward to New York City. There are profits to be made by those that can ride the waves of change. But for those less nimble, or too old, or too poor to stay afloat—well, displaced, they’ll move on just like they always do, or eke out a poorer life on the fringes nearby.
Bound Brook will loose its historical architecture in the new flood, replacing its previous population with young professionals and their families.
Change comes crashing in from tomorrow–everyday; it landed today–everyday;
and in a string of everyday yesterdays, it crushes and then buries the past.